First day back at schoolJanuary 7th, 2019

See below for my interview with Damian Kysely; a subect matter expert on eVTOL and Urban Air Mobility (UAM). Damian is Infrastructure manager at SkyPorts skyports.net, a new business focused on developing the infrastructure required to support UAM. Damian is also co-founder of The Aviary Project medium.com/aviaryproject which was set up to facilitate collaboration in the emerging UAM and eVTOL sectors.

Nick: Hi Damian, Many thanks for taking the time for me to tap into your knowledge!

First off, I have read that Skyports have partnered up with Volocopter, this strikes me as a partnership with huge potential for you guys. Volocopter are one of the more ambitious players in the market to date, and they are even working with the innovation arm of the CAA (Civil Aviation Authority) in order to define the new regulations required for UAM.

Further to this, Volocopter have published some very eye-catching ideas of how they see UAM transport hubs of the future. They look like giant ski lift stations that can handle several hundreds of people.

Are you guys at Skyports actively involved with the conceptual architectural work that Volocopter has done to create this promotional material?

Damian: Skyports have worked with Volocopter to design and develop the first prototype ‘Volo-Port’ which will be built up in Singapore. This is effectively a qualification model that will test that we can meet many of the requirements for an eVTOL vertiport. Including managing the flow of passengers, getting them checked-in, and also the recharging of the vehicle itself, in this case battery swap.

We were not involved in the initial conceptualisation of the VoloHub, but of course we look to incorporate some of the high-throughput components into our future work with Volocopter. Skyports’ goal is to be the preferred infrastructure provider to Volocopter and other vehicle manufacturers and operators as the industry scales up.

Nick: Thanks for clarifying. With regards to Volocopter’s grand plans for their transport hubs, these look like they will need to be made on top of purpose-built buildings. Are Skyports currently in negotiations with companies so that they can incorporate new features into buildings that they are yet to start?

Damian: Skyports have secured several sites on top of existing buildings that have sufficient structural capacity to be retrofit with a vertiport of certain size. In parallel, it is very important that property developers incorporate vertiport requirements into their plans from day 1, otherwise we will end up with loads of buildings that are useless for this purpose. This is something we’re doing at Skyports as well and it is increasingly sought after. And yes, in the future purpose-built towers with Skyport provisions are very likely. For example, Uber aims to convert entire buildings (car parks) into Uber Hubs for UberAir services.

Nick: With regards to the legislation and regulation, which body creates and upholds this?

Damian: In the UK this will be CAA again. All of our vertiport designs comply with existing ICAO (International Civil Aviation Organization) heliport standards and CAA adopts them. Therefore CAA will be the one giving us a stamp from a regulatory point of view.  On a local level, it will be the city authorities and planners giving us a permission to construct them and operate them.

Nick: I also note that Lilium, a potential future competitor to Volocopter, is also looking to create their own infrastructure. This will enable them to offer a complete service offering, rather than just an eVTOL product. Do you see the different eVTOL companies collaborating with one another to share transport hubs, or do you think that they will seek to create their own unique hubs? 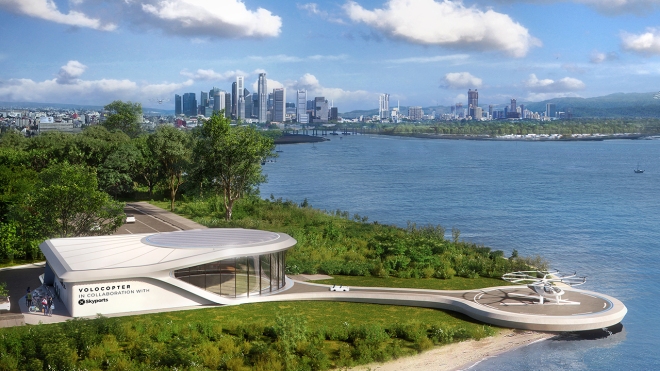 Damian: I think that each organisation will seek to create it’s own individual hubs to start with, for example, I can’t see Volocopter and Lilium wanting to work together at this early stage when they are likely to be in competition with one another.

Skyports are already very close to most of the leading vehicle manufacturers alongside Volocopter. Our main principle is that all of our vertiports will be vehicle agnostic in the long term and everyone we have spoken with, including Volocopter and Lilium, agrees on this.

Nick: Looking at the established airline industry of today, most groundside operations and interfaces are standardised. These include refuelling, food and beverage logistics, as well as safety checks. Is work being done in order to standardise these and other items in the UAM sector?

Damian: There is some work being done in the U.S. looking at what should be standardised, however this is not the current priority of the eVTOL manufacturers. They are still very much looking at the overall systems design and how they can maximise the efficiency (cost / range / speed etc.) of their products.

Nick: I note also on the Skyports website that it is predicting drone deliveries over London by 2021. This statement was released almost a year ago. With the progress made since then, do you think that a 2021 date is still achievable?

Damian: Anything is achievable with enough resources! Joking aside, I think the way things are progressing, 2021 could be achievable for a point to point route, say for instance from one hospital to another. I think also that the route will need to run along the river. Once something like this has been fully proven then we may see an over land equivalent.

London is lagging some other locations. For instance, drone deliveries as I have just described are already happening in Switzerland and other parts of the world.

Nick: Are there any pertinent reasons why London is lagging behind?

Damian: Legislation and regulation are the biggest barriers to progress. This is not helped by the fact that London is notoriously ‘anti-helicopter’. In relative terms, London is a quiet city considering its size, and so helicopter noise pollution tends to be all the more noticeable, and therefore also unwelcome. This makes public percpetion and adoption of drones and other flying vehicles all the more challenging.

Nick: Well as a resident of London, I love the idea of flying taxis, but if it means I will have hundreds of helicopters flying above my head, I may quickly change my mind! Just how noisy are these eVTOL likely to be?

Damian: Volocopter and Uber Elevate have released white papers that hint on the estimated noise levels, which claim they are significantly quieter than traditional helicopters. But none of the other companies have. There seems to be quite a lot of secrecy surrounding this area. Without knowing the respective noise levels, it will be very difficult to get the legislation issues resolved.

Nick: Well Damian, I’d like to thank you once again for your time, this has been a very informative and enjoyable conversation.

For those of you who would like to learn more about the industry, I encourage you to check out their excellent blog at The Aviary Project: https://medium.com/aviaryproject. As mentioned above, this was set up by Damian and others with the prime purpose of promoting eVTOL and UAM.